Shostakovich's 8th quartet (1960) is almost certainly his most well known and most written about quartet. A work which is infused with his own initials in every movement - it is intensely emotional and dramatic. We have found 2 pieces of writing about this work that are very personal to us. Firstly, below is an article for The Musical Times that Emma's father Alan Lumsden translated in 1961. (He also brought back many scores from Russia at a time when they weren't available in the UK). This is an example of intelligent Soviet music criticism which however only really tells half the story!
Below this is an insightful programme note written by Emma's great uncle - Robin Hewitt-Jones. 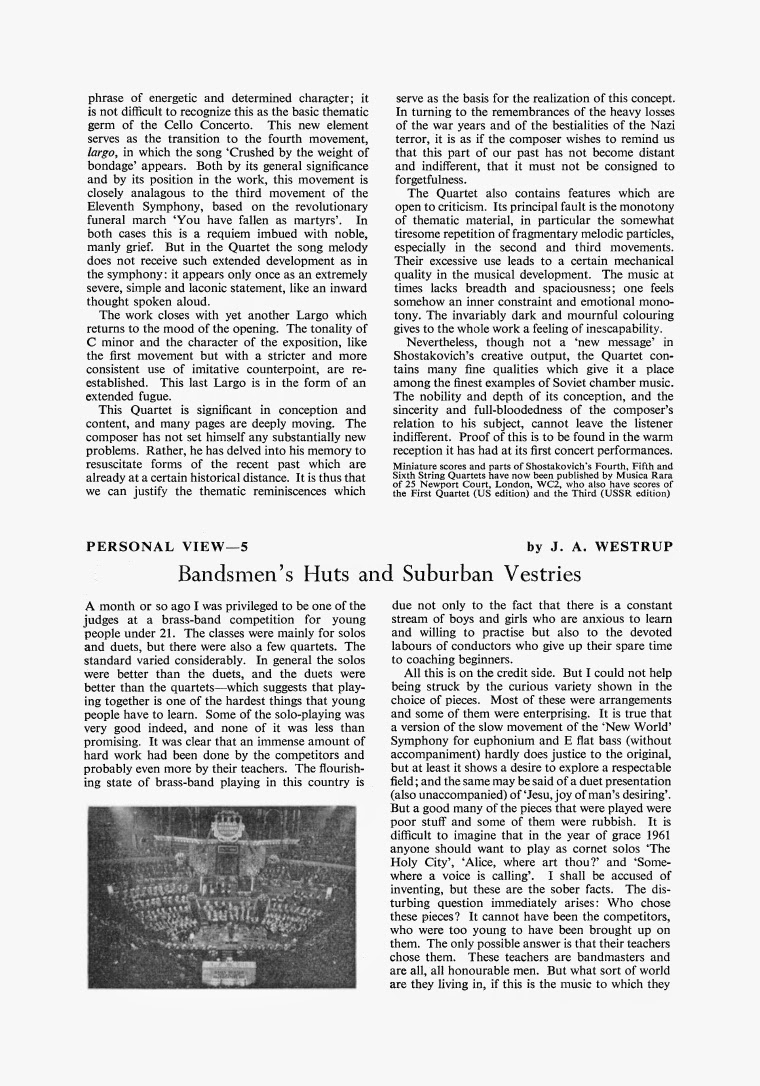 String Quartet No.8 in C minor, Op.110  Dmitri Shostakovich (1906-1975)
1.Largo
2.Allegro Molto
3.Allegretto
4.Largo
5.Largo
In German notation, 'S' stands for Eb and 'H' for B. Hence, the first four letters of Dmitri SCHostakowitsch's name (spelt the German way) give the sequence D Eb C B. This musical signature is to be found in a number of his works, but above all in Quartet No.8, written in three days in July 1960 after a visit to war-torn Dresden. The quartet was taken by the Soviet critics to express a revulsion to the ravages brought about by Nazism, and this 'party line' was reinforced by the composer's own sub-title 'To the memory of the Victims of Facism'. However, recent views hold that this was partly a 'smoke-screen' to obscure a second meaning of the work which is a condemnation of the Russian totalitarian regime into which Shostakovich had been unwillingly drawn by degrees during his life-time, and now forcibly as a member of the Party. The death of Stalin in 1953 and the partial relaxation of artistic control which followed had not released Shostakovich from the grip of the system he so much despised, and now in 1959 he was sent to America to lead a delegation of composers as a reluctant ambassador for the Soviet regime. The final insult came on his return home, when he was made, under duress, First Secretary of the Composers' Union, a post which required membership of the Communist Party. According to his close friends, such a fate was to Shostakovich comparable to death itself; but, not daring to make his true feelings public, he converted them to music between whose lines his fellow musicians would be sure to read. Some have gone so far as to believe that the composer was contemplating suicide and that Quartet No.8 was intended as a musical suicide note, a coded message to the world of the reason for his death. Whatever the truth of these speculations, it is a fact that the link between third and fourth movements is meant to represent the drone of war-time bombers and the crackle of anti-aircraft fire; also, that one of the most hauntingly beautiful episodes in the fourth movement is a quotation from the revolutionary Russian song 'Languishing in Prison'. What is certain is that, more than any other from his hand, the work is obsessively dominated by Shostakovich's musical signature and contains a number of autobiographical quotations from other works including the 1st and 5th Symphonies, the Piano Trio, the Cello Concerto, and the opera Katerina Ismailova.
The Quartet is conceived as an uninterrupted sequence of five movements for three of which a slow tempo is chosen. In the slow movements it is intensely poignant and personal; in the quicker, bitter and impulsive. The first Largo is a kind of contrapuntal prelude on the DSCH motif. The Allegro Molto which follows is a powerful sonata movement in which the signature theme is developed and at one point augmented (ie played at half speed) by the two violins in canon. This leads to a waltz-like Allegretto, the DSCH figure once again prominent but this time in diminution. A declamatory recitative announces the fourth movement in which Shostakovich quotes the patriotic song mentioned above, and this leads by way of a reappearance of the now familiar signature to the final Largo. Here is a reflection of the opening prelude in the form of a fugue based on the same theme, recapitulating in the coda several other passages from the first movement and thus strengthening the impression of a work not of five separate movements, but of a single thematic idea containing several extended variation-like episodes of contrasting tempi.
Whatever lies behind the enigma of this work, we are left with an abidingly beautiful, accessible piece expressing deeply felt emotions, finely integrated and balanced in its use of homophonic and polyphonic textures. In short, a work which proves that Shostakovich's reputation as one of the 20th century's greatest composers does not rest solely on his symphonies.
note by Robin Hewitt-Jones

'When a man is in despair, it means he still believes in something.' Dmitri Shostakovich

Carducci Quartet
Described by The Strad as presenting “a masterclass in unanimity of musical purpose, in which severity could melt seamlessly into charm, and drama into geniality″ , the Carducci Quartet is recognised as one of today’s most successful string quartets. Performing over 90 concerts worldwide each year, the quartet will perform the complete Shostakovich string quartets in 2015 in cities including London, Washington DC, Oxford and Bogota! www.carducciquartet.com