We are truly delighted to share that the Carducci Quartet has been announced as the winner of the Chamber Music and Song category at the 2016 Royal Philharmonic Society Music Awards for Shostakovich15!


The project saw us perform all 15 of Shostakovich’s String Quartets throughout 2015, across the globe. With an accompanying CD release for Signum Classics, Shostakovich15 was also highlighted in The Guardian’s “Best of 2015 Classical Music”.

The Royal Philharmonic Society [RPS] Music Awards, presented in association with BBC Radio 3, are the highest recognition for live classical music and musical excellence in the United Kingdom. Awards in 13 categories are chosen by eminent independent juries from the music profession. 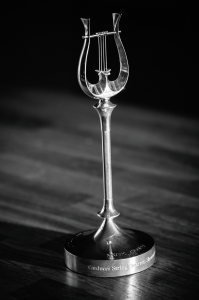 A few months have passed since the end of out Shostakovich15 project and we have had a chance to reflect on the incredible journey we have been on.
The experience of living so intensely with the fifteen quartets was, at times, overwhelming and we were privileged to share it with so many friends and supporters.
The marathon day at the Sam Wanamaker theatre was an obvious highlight and we recently found out that we got through over 400 handmade candles that day!
Another highlight has to be taking the cycle to Colombia for the first time ever and introducing Shostakovich's quartets to a whole new audience.
So a big thank you to everyone who came on the journey with us and we look forward to seeing what 2016 will bring! 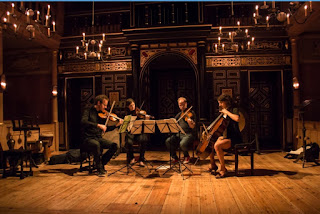 Posted by Carducci Quartet at 03:37 No comments:

'When a man is in despair, it means he still believes in something.' Dmitri Shostakovich

Carducci Quartet
Described by The Strad as presenting “a masterclass in unanimity of musical purpose, in which severity could melt seamlessly into charm, and drama into geniality″ , the Carducci Quartet is recognised as one of today’s most successful string quartets. Performing over 90 concerts worldwide each year, the quartet will perform the complete Shostakovich string quartets in 2015 in cities including London, Washington DC, Oxford and Bogota! www.carducciquartet.com